Talk to anyone involved in the hobby of metal detecting, and chances are they own a Garrett AT Pro. The reason for its widespread popularity is simple- no other metal detector offers the same functionality and features at this price point.

The Garrett Metal Detector is one of the most sought-after devices in the industry. This 15 kHz metal detector has three discrimination patterns making it the ideal tool for detecting items such as coins, jewelry, and relics.

No matter if you are a beginner or a seasoned treasure hunter, the Garrett AT Pro is an incredibly versatile device fit for all levels. Having used many different devices over the years, the Garrett AT Pro stands out as the most effective metal detector in the market. So let’s take a closer look.

The Garrett AT Pro is a 15 kHz waterproof metal detector capable of working in different environments. AT, in case you are wondering, stands for “all-terrain”. You will rarely see a 15 kHz coil on a VLF (very low frequency) detector, especially at this price point.

Additionally, low conductivity metals like gold and iron can only be detected by high-frequency coils. This is why most entry-level metal detectors with 6 kHz or so frequency aren’t effective at detecting precious metals.

This is why the Garrett AT Pro is a suitable candidate for hunting smaller objects, including small gold nuggets. However, do keep in mind that while it can detect smaller gold nuggets, it is not explicitly designed to find gold. For that purpose, you will be better off with something that has a higher frequency, like White’s Goldmaster GMT.

Who is this Product For?

The Garrett AT Pro is ideal for those who want to hunt small metallic objects such as coins, small precious metals like gold nuggets and silver, relics, jewelry, relics, and cache. The 15 kHz coil frequency is high enough that it will detect smaller objects with ease.

Moreover, thanks to its waterproofing, you can use this detector in shallow waters without damaging it. It is also incredibly light at just 3.03 pounds which allows you to use it for longer without any fatigue.

Since this is the 55-year anniversary version, you get some extra goodies inside the box. The standard Garrett AT Pro comes with:

However, in addition to what’s listed above, the 55-year anniversary edition comes with the following:

The Garrett At Pro has two audio modes, Pro and Standard. The standard model is geared towards beginners and uses three audio tones depending on metal conductivity. On the other hand, the Pro mode audio offers more information about the depth, conductivity, and details of an object.

This feature is often found in more expensive devices. The iron audio mode, when enabled, will cause such low grunting sounds that you will know for sure that there is iron in the ground.

Ground balance refers to a metal detector’s ability to differentiate between minerals in the soil like salt and traces of iron and actual targets. This feature is a must-have as it cuts down on unnecessary signals allowing you to focus on valuable objects.

The Garrett AT Pro is fully submersible up to a depth of 10 feet. This will allow you to hunt in shallow waters such as rivers, ponds, creeks, lakes, or even the beach. However, note that the included headphones aren’t waterproof, but you can buy aftermarket ones if you want.

The Garrett AT Pro has six different search patterns that you can select from depending on what you are looking for. The settings are customizable, and you can set your own parameters according to your needs. However, one major gripe with the display is that it is not backlit. This can make it difficult to read the screen when it gets darker outside.

How to Use The Garrett AT Pro

Using the Garrett AT Pro is pretty simple. If you have prior experience with other detectors, you can start using them without needing to look anything up. However, if this is your first metal detector, then you can watch the first video of a seven-part series on how to operate the device.

Moreover, you can also consult the detailed user manual that comes within the package. The instructions in the user manual are very easy to follow and understand. Every single feature of the device is explained at length.

The Nokta Makro Simplex is an option you should also look at. This model has pretty much the same features and functionality with the added benefit of a backlight. However, the frequency is on the lower side at 12 kHz, making it suitable for larger objects. It is also completely waterproof, the same as the Garrett AT Pro. 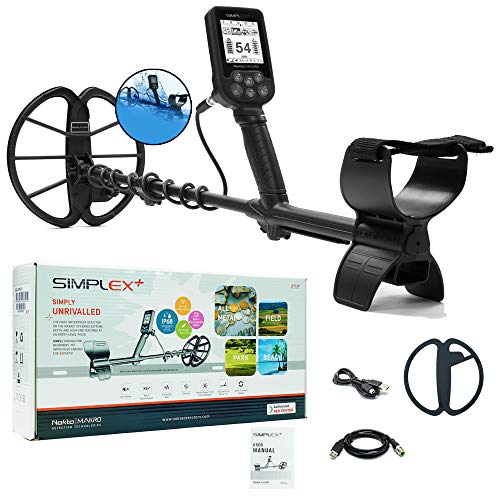 This Garrett Metal Detector is an exceptional machine. It lives up to its popularity by providing flawless functionality and is versatile enough to be used in a host of different terrains.

The anniversary edition comes with additional accessories, the most valuable of which is the Garrett pro-Pointer AT. In addition, the 15 kHz coil frequency is ideal for hunting small metals such as jewelry, coins, and other relics.

One of the most impressive features is how well it distinguishes between the elements in the soil and actual metal objects underneath.

However, it does have a couple of flaws. First, the headphones aren’t waterproof, which means you will have to spend extra on third-party headphones. More importantly, the display doesn’t have backlighting which can be really frustrating in poorly lit environments.